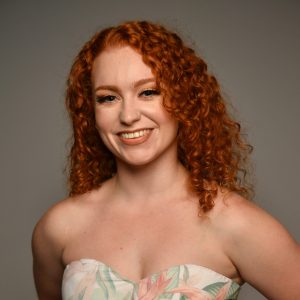 Shannon attended Westfields Sports High School and studied at Select Dance Co. and All Starz Performing Arts Studio. This is where she was trained in RAD and BAL Ballet, as well as Glenn Wood Tap and Tap Attack Oz. Shannon also had the opportunity to be apart of the Locreado Dance Program during 2014.

Shannon has worked for Disneyland Paris as a ‘Character and Parade Performer’ and appeared as several suit characters in a Nickelodeon Junior TV Series called ‘Calvin and Kaison Play Power’. She has worked with Nikki Webster on the release of the Trolls World Tour – Australia’s Biggest Trolls Dance Party as the character ‘Poppy’ and has also performed with Ready Set Dance in their live shows as their character ‘Freeze’.

Shannon has had the privilege of being a member of the NRL Dragons ‘Flames’ Dance Team and is a current member of the NBL induct ‘Hawks’ Dancers. At the end of 2021 she was a company member of the Locreado Dance Company, producing a professional contemporary show called ‘Arkiteknicians’.

Shannon has her RAD Ballet Teacher certification (RAD: CBTS), as well as her Certificate III in Assistance Dance Teaching.